The project 'Cinema Parisien 3D' (2015-2016) aimed to build a 3D visualisation of Cinema Parisien, one of the first purpose-built cinema theatres in Amsterdam, established in 1910 by cinema owner and distributor Jean Desmet (1875-1956). The goal of the project was to investigate the affordances of 3D modelling for presenting digital cinema heritage in a comprehensive, evocative form. In addition, it explored the opportunities of 3D visualisation as a research tool for studying the history of cinema. The choice for Cinema Parisien as a case was motivated by its historical importance as one of the first permanent cinema theatres in Amsterdam with a long, rich history that is extensively documented.

An important goal was to comply with the principles of historic 3D visualization as laid out in the London Charter. This charter aims to give a guideline to warrant the transparency and methodological rigour of 3D visualizations in the humanities. Cinema Parisien has implemented two important principles: the addition of paradata to the model and a system to visualize levels of uncertainty in the reconstruction.

Online publication of interactive model (note: does not work with some browsers) 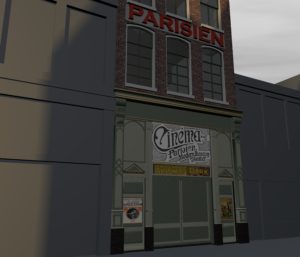 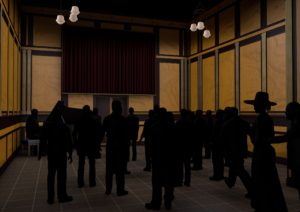 People stood during a film 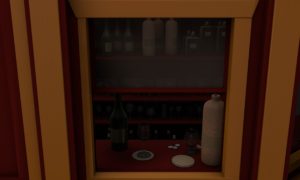 The cinema had its own liquor booth