What is 'augmented blended learning'?

Blended Learning is a form of education innovation concerned with blending various forms of student-teacher interaction and an emphasis on the application of (online) digital methods to reach this goal. By alternating various teaching methods and variably activating multiple senses, the aim is to maximise understanding and retention of knowledge by students. The UvA actively invests in such initiaves.

In the context of education in the fields of archaeology, history and heritage, the 4D Research Lab continually experiments with various Augmented Reality (AR) and Mixed Reality (MR) applications to find baselines for effectivity and the added value of this technology. These techniques, combine in variable degrees of integration the real world and digital objects and databases. In contrast with Virtual Reality (VR), the connection with the real world is not lost when using AR or MR. Their potential benefit is to allow teachers to convey theory and skills in more effective, and certainly more immersive, ways.

The 4DRL has experimented extensively with AR / MR in the course of a series of projects funded by the University of Amsterdam in the context of education in the faculty of Humanities, within the Amsterdam Centre for Ancient Studies and Archaeology (ACASA) specifically, and in close collaboration with the Allard Pierson archaeological museum. These are endeavours in what we have dubbed ‘Augmented Blended Learning’.

This page is meant as a knowledge base to share ideas, workflows and lessons learned to those interested. 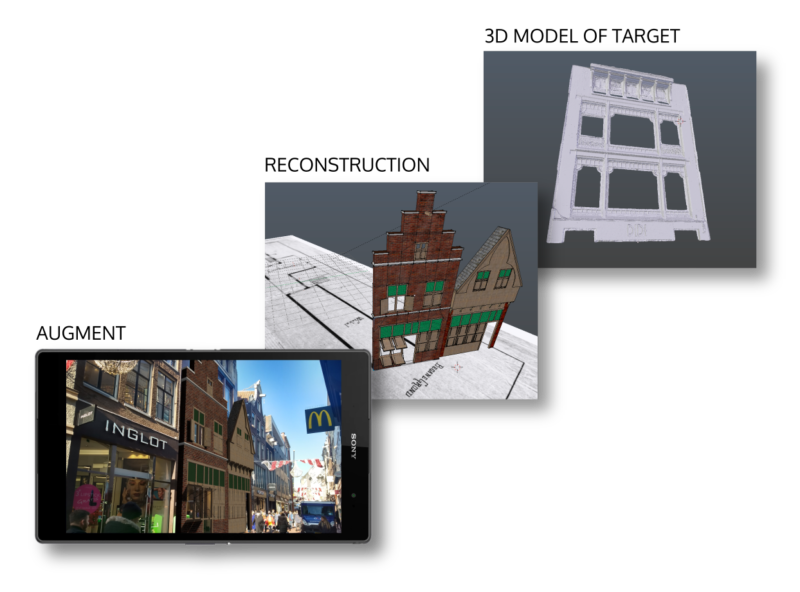 Steps in the process of making an augment: 1. a 3D representation of the target object, a real object in the world that can be recognized by the software. 2. a 3D reconstruction based on historical information such as maps, drawings and descriptions. 3. combine the models in an app that can be installed on a mobile device. 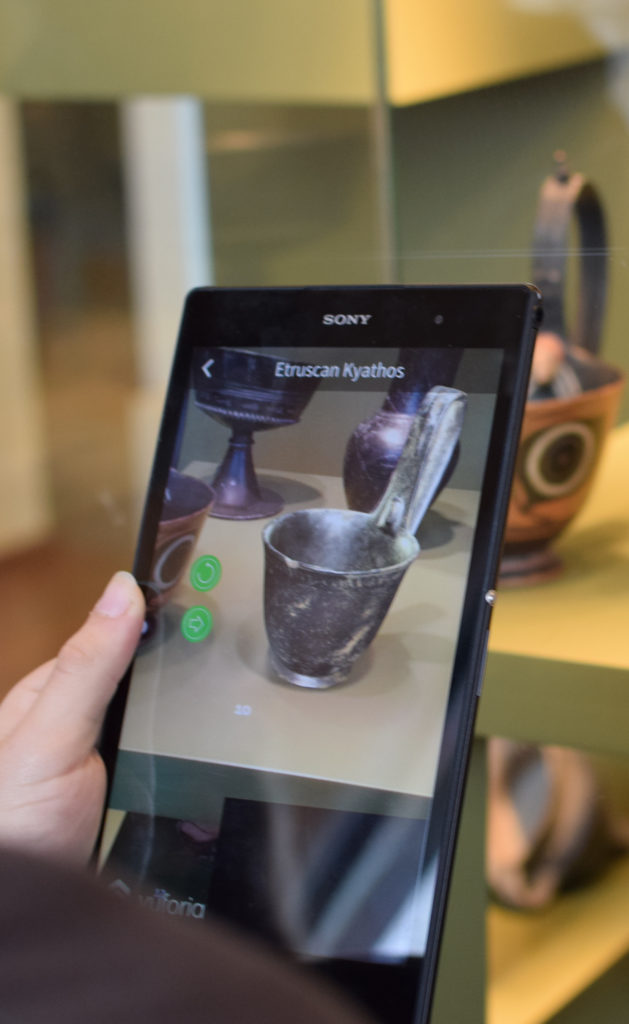 AR on a tablet which recognises artefact shapes and overlays them with a 3D model of the object, allowing the user to interact with the object.

In Augmented Reality, digital 3D objects, along with text, video and a user interface is projected over the physical world, which remains visible in the background of the augment. A medium is used like a head-mounted display. A smartphone can also be used, at the cost of being less immersive. In the case of ‘Mixed Reality’, there is interaction between reality and the digital augment; the surrounding space is scanned, and it becomes possible to bounce a virtual ball off a real wall. (The Hololens shows the triangulated surfaces of things it considers a hard surface or wall).

Augmenting Artefacts (AA) explores the use of interactive augments of artefacts in the Allard Pierson Museum. AR is used to recognise a small assemblage of particular artefacts, connected to the symposion, the Ancient Greek drinking banquet. On recognition of the real objects, context is provided through a voice-over and references to websites and comparable objects in other museums. The additional material resources and/or ancient texts, along with comparable ceramics in museums elsewhere, create an enriched experience to provide clues as to interpretation of, and reflection on the objects and their context.

In the Blending Past & Present (BP&P) project students are challenged to visualise the past city of Amsterdam, making 3D reconstruction of buildings and view them in context of the current urban setting. Reconstructions have been produced by students of a course on 16th century artists in Amsterdam, which are projected on current facades on the same location of the 16th century buildings. The task for the current students is to evaluate reconstructions, especially the spatial aspects, as well as experiment with the AR for presenting and communicating the result of their work.

In the Artificial Archaeological Intelligence (AAI) project, the concepts of augmenting artefacts are ported to a so-called hololens. This is a headset that projects virtual objects directly in front of one’s eyes, creating a much more immersive experience. The course centres around the production techniques of three ceramic objects. These objects can be recognised in the Allard Pierson Museum, and can then be digitally taken out of the cabinet, rotated and resized. The ‘production sequence’ was re-enacted by an experimental archaeologist, who is seen recreating the objects in videos filmed from multiple perspectives. The videos are accompanied by an extensive voice-over explaining the techniques used, and traces of the techniques visible on the artefact. Understanding of how the ceramics are made teaches the students to place the objects in a wider archaeological and social context.

All projects have been made possible by ICTO FGw, find also the project descriptions at their page.

The Allard Pierson (AP), University Museum of the UvA has kindly provided the opportunity for experimentation and implementation.

The AAI project has been developed with Hololenses kindly provided by the Visualisation Lab and by the AudioVisueel Centrum.

The AR / MR technology enables operationalisation of various concepts of communicating information, that are used in various degrees and combinations in the projects (see also earlier blogpost).

Projecting the missing & the vulnerable
Augmented Reality (see textbox) adds a virtual layer to the real world. It can show reconstructions and information as an interactable environment. It makes it possible to communicate more closely with heritage, also when part of it is gone, or when it would normally be too vulnerable to examine. Enlarging ceramics in an augment shows details and traces without any risks, and showing the size of buildings or reconstructions in reality gives a sense of comparison not possible with a display on a screen.

Visualising context
The 4DRL has experimented with AR to show archaeological and historical context on multiple scales; of objects in the museum and entire buildings in the cityscape of Amsterdam. For buildings, augmented Reality makes it possible to view reconstructions at their original location. For objects, context can be given in the form of archaeological circumstances, comparable artefacts in museums and online, and media or ancient imagery depicting use of ceramics or objects. In the augment, these connections can be made clear by highlighting details or depictions on objects.

Virtual teacher
The produced apps offer the opportunity for a student to carry a ‘virtual teacher’ with them to the museum. It offers them the opportunity to take in information at their own pace and schedule. It is furthermore a valuable addition to scheduled classes of a course, as artefacts can be explained and studied in a visual manner not possible otherwise. Blended with the possibility to recombine various objects and sources, bring explanation into practice and to add all kinds to an augment, creates a kind of virtual lab, in which the student is challenged to experiment with the available information and sources. 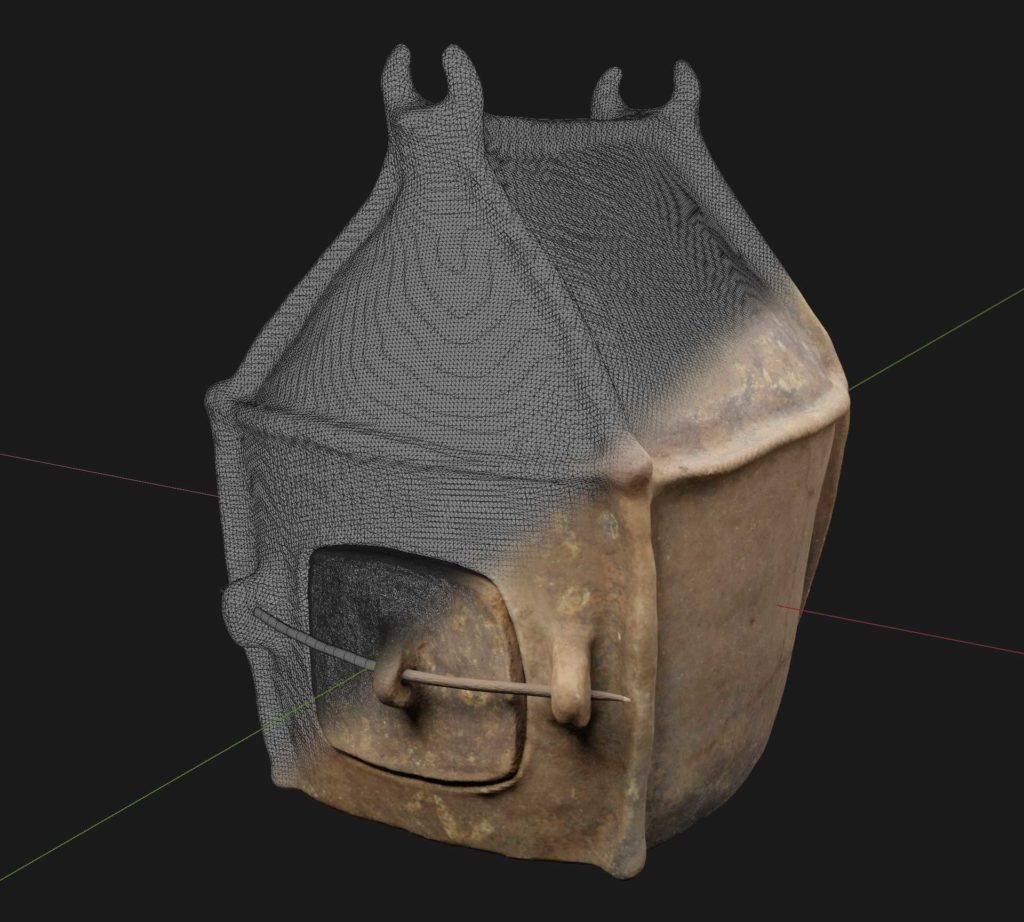 3D model of an Etruscan hut urn from the Allard Pierson 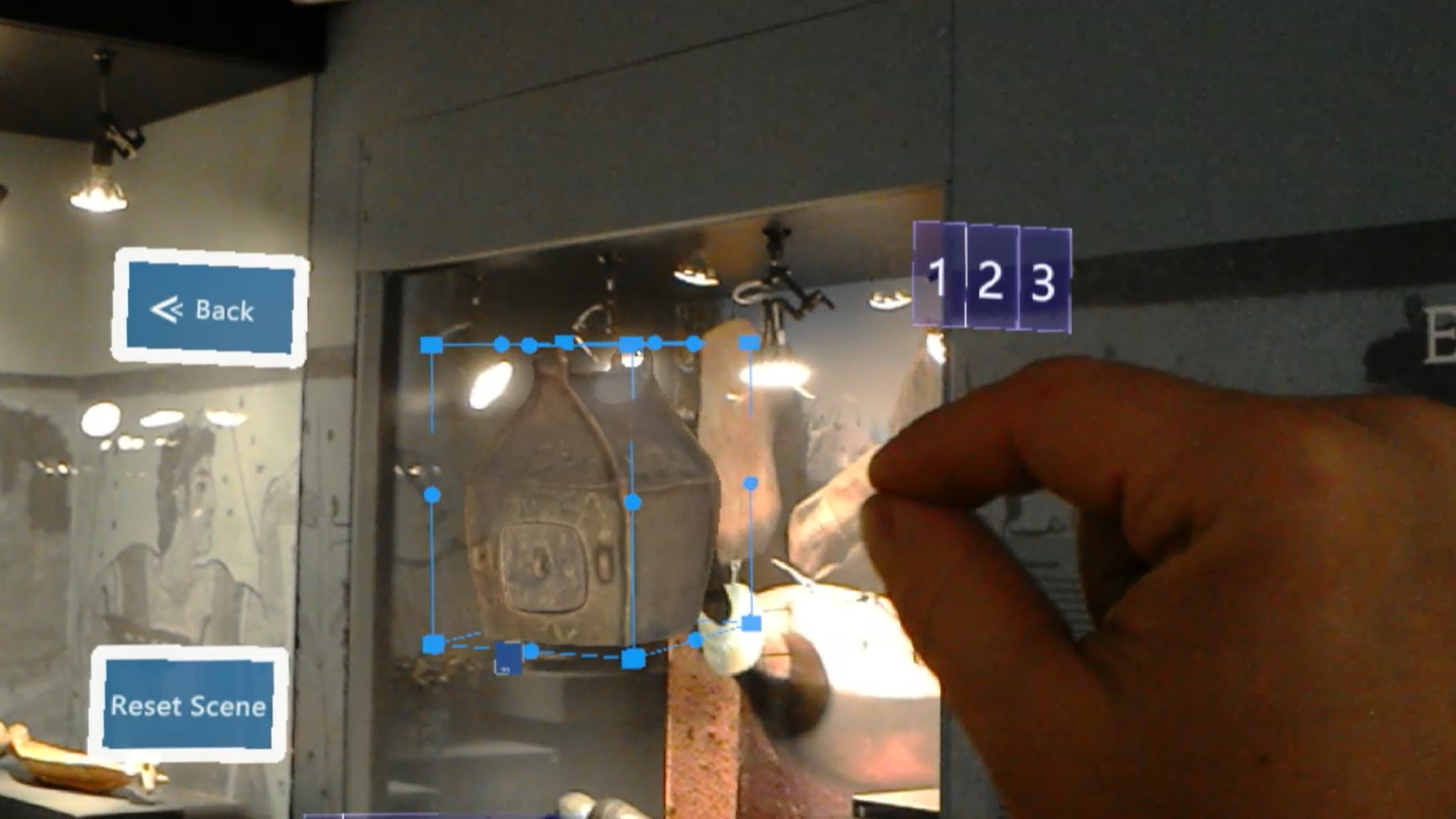 In order to create AR / MR apps for educational purposes, planning and coordinating are essential. Equally important is the required technical expertise. Please find a flowchart on the right as a guide through the process of app creation described in main components of conceptual and practical development. Please consult the screencasts for technical tutorials through Vuforia AR in Unity, and app development for the MS Hololens.

Flow chart for the process of creating an AR app