The bisshop weeper from the tomb of Guy of Avesnes

Reconstruction of a sculpture found on the tomb of Guy of Avesnes, Bisshop of Utrecht, who died in 1317 AD. Today, this funurary monument is strongly affected by chemical and physical degradation processes. It was scanned in 2017 with the aim of preserving its current state and to form the basis for a digital reconstruction.

This digital restoration project focussed on one of the weepers, small tomb sculptures positioned around the monument whose role is to lament the dead bisshop. But medieaval sculpture like this also had a social and political message, and could be considered as a form of post-mortem propaganda. One weeper in special draws the attention as it appears to be unusual in its positioning in its niche. Frequin hypothised that this weeper might in fact be Gwijde himself. This project focussed on the reconstruction of this sculpture to validate this hypothesis. By close examination of the high resolution 3D scans, the few preserving original surface areas were determined. From here, by looking at the curvature of the surfaces, and by studying analogue cases of 14th century sculpture, the surfaces were restored. Finally, the reconstructed weeper was coloured based on pigment analysis and colours retrieved from other sculptures, to form the frontispiece of Frequin's PhD dissertation.

Photo of the weeper of the funerary monument in its current degraded state. Photo credit: Sanne Frequin 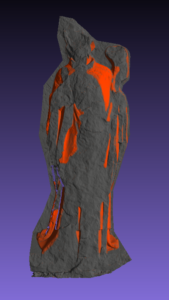 Determination of preserved original surface area on the weeper. 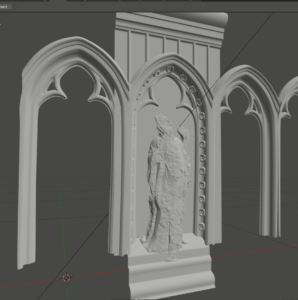 Restoration of the Bishop weeper in process